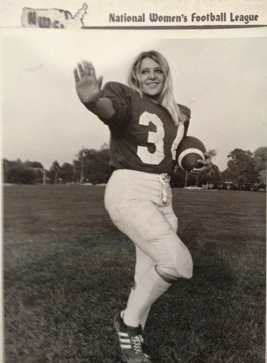 Personally, I really care about this eventful competition. From 1971 to 1973 I played Women’s Professional Football for the Toledo Troopers (Middle Linebacker, #34 see photo) We women who played tackle football, according to NFL rules were deemed pioneers and trendsetters. There’s much more to say here, and I’m in the process of writing the story.

The trends are being set again! And, history is being made.

The Tampa Bay Buccaneers will play the Kansas City Chiefs in their own stadium in Tampa. This is the first time a team has played a Super Bowl in its home stadium.

Speaking of “home”. Tampa was my home for 40 years. It’s where I lived when I graduated from Stetson University with a Juris Doctor, practiced law in the State and Federal Courts, sailed and scuba dived. And, most importantly where my son grew up.

This note of honor, recognition, and commitment to excellence is written before Super Bowl LV. Congratulations to all who are involved in setting a positive trend in our world.

The Chalice provides extra dimensional information and impetus to Cara. If she is to right a … END_OF_DOCUMENT_TOKEN_TO_BE_REPLACED

Spring Equinox ushers in renewal, and resurrection. The moon sets the time for Easter. Pagan … END_OF_DOCUMENT_TOKEN_TO_BE_REPLACED