What’s the difference between the civil unrest, protests, and mayhem of the late 60’s; specifically 1967, and those of 2020?

I was here in the U.S. and experienced the circumstances of each era. 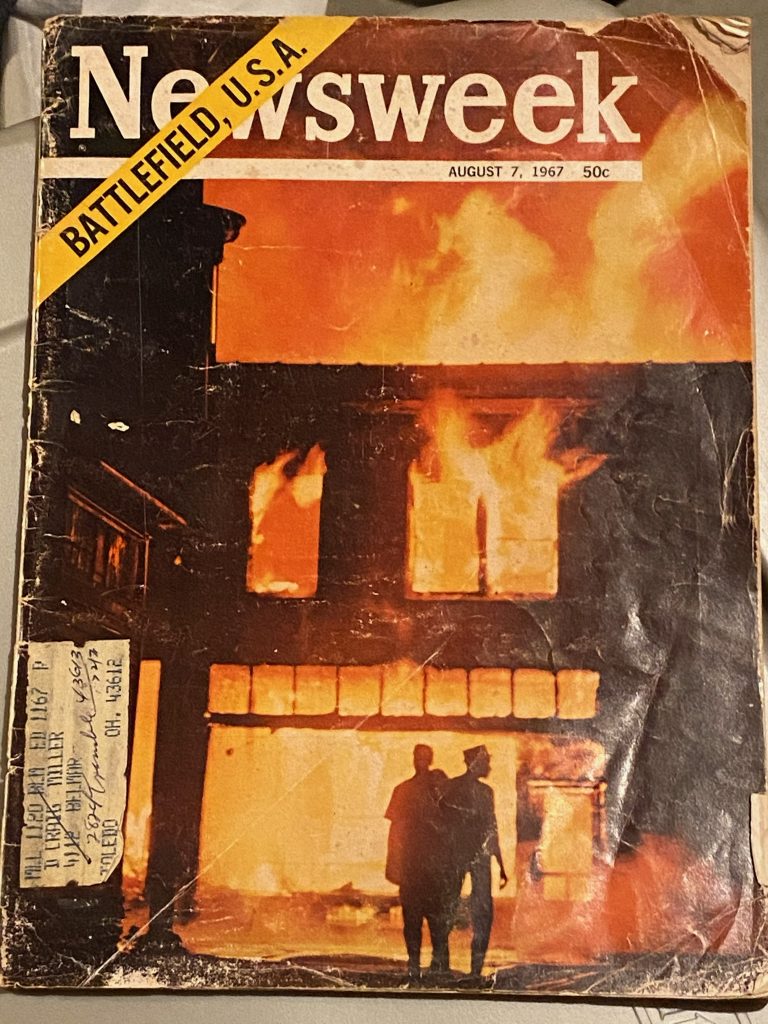 In 1967, I was living in Toledo, Ohio; 50 miles south of Detroit, which was in flames in July.  I kept a Newsweek magazine dated August 7,1967 with the fiery fierceness forging the cover.

Now. in the autumn of 2020 the disorder and societal disharmony differs. In 1967 the shooting, looting, and firestorm lasted four days with 43 people dead, and an area of the City of Detroit in ruins. Currently, the civil unrest although less destructive is socially insidious.

But that’s not the real, genuine difference.

My contention is that the 2020 discordant demonstrations are being personally and politically ignited to effect an incendiary purpose symbolized by fear, conflict, and societal division based on race, gender, religion, national origin (immigration), political power, and financial prowess.

Even though the 1967 National Advisory Commission on Civil Disorder implicated local police forces as a primary source of civil unrest, along with other societal and racial disparities; this year’s civil unrest shows signs of being intentionally kindled, inflamed, and aroused. This intentionality was not present during the unrest of 53 years ago.

Probably the most disconcerting for me…and those of us who went through the trauma of the years…We produced laws undoing discriminatory practices!

Affirmative Action laws were passed and corporations complied. In 1975 I was hired by a Fortune 500 company, to a position previously only allowed to men.

Much progress was made in rights for all Americans; blacks, women, disabled. Title IX of the Education Amendments to Civil Rights Law of 1972 prohibits discrimination on the basis of sex in education programs and activities.

Since then women’s sports, especially in colleges and universities has soared in popularity and prosperity. Not to mention the powerful effect on girls and women who are now accepted as esteemed athletes.

This current provocation of conflict, clash, and battles to promote personal and political agenda is entering an all-time high.

Recently, the FBI thwarted a plot to kidnap a state governor, effect a make-shift criminal trial, and execute the state official.

The difficulty as I see it, is that people are fitting into some   comical, yet descriptive assignments such as “sheeple” and “lemmings”. We the People seem to be turning into a fearful gaggle of conspiracy theory cult followers.

Personally, I won’t be manipulated. My beliefs are not available as a ploy to exalt another’s greed for money, winning, and power. I refuse to be a pawn in someone else’s chess game.

Accordingly, I am militating against such unscrupulous maneuvering, and misrepresentation. The word “shame” comes to mind. This current political situation shames us in front of the rest of the world and God.

The Chalice provides extra dimensional information and impetus to Cara. If she is to right a … END_OF_DOCUMENT_TOKEN_TO_BE_REPLACED

Spring Equinox ushers in renewal, and resurrection. The moon sets the time for Easter. Pagan … END_OF_DOCUMENT_TOKEN_TO_BE_REPLACED